Everybody deserves to have a bit of technology in their lives irrespective of where they are or circumstances that surround them. Something, such as a electricity or stable water supply that are intended to make life more pleasant or comfortable for people, some do not have. Thanks to WAAW Foundation who takes this principle around to empower people in the Internally Displaced People’s (IDP) camp, not by “giving them fish but by teaching them to catch it”. 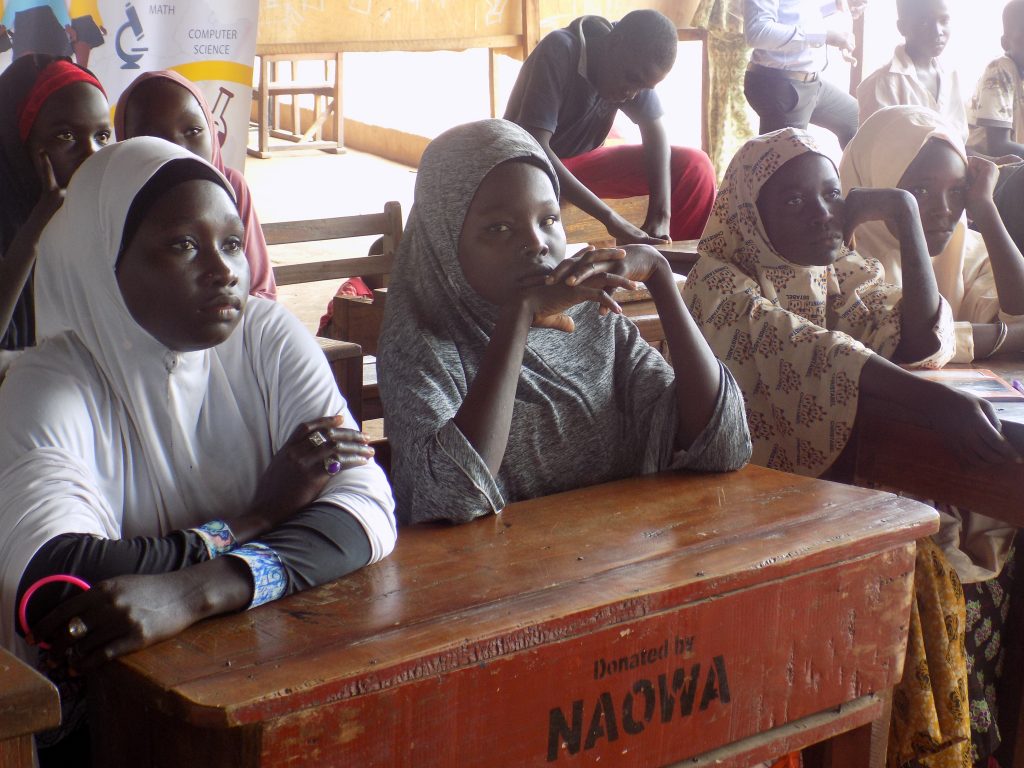 In IDP Camps where hope is very much needed for the future, life is even more difficult without technology. For these people who have been naturally displaced from where they call home and are looking forward to a brighter life, technology can be the brightening source of hope they require.

Many think of technology as big machines and computers running but people in IDPs do not think of such sophisticated appliances and are probably contented with seeing others take on technology while they look on. Changing the narrative however, WAAW Foundation is bringing the simple rules of technology and using simple materials around them, things they see every day, to demonstrate how close technology is to them with focus on the girl child.

Windmill seems a big word and electricity generation doesn’t seem like what a girl in an IDP camp could achieve, so prior to the practical session, the guest speaker, Rachael Zakaria, a graduate of Environmental Sciences from the University of Abuja, took participants through a motivational session and encouraged them to stay focused. She also spoke to the participating girls about herself, her challenges, her motivation and aspiration as a means of gearing the girls towards a better expectation of the project. These made the girls believe that, not only could they build a wind mill but also rise up to achieve their many dreams. 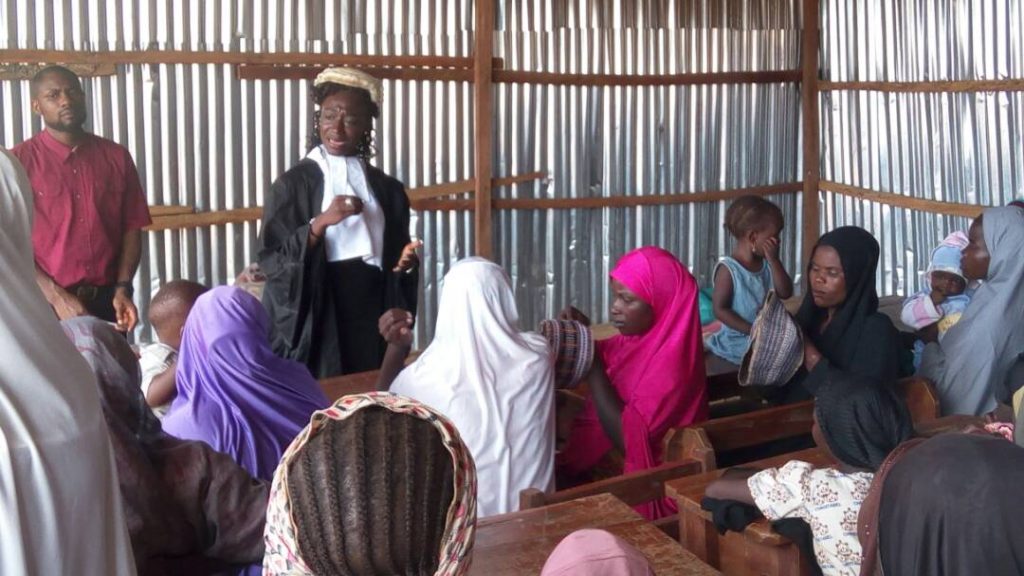 Also, students watch the video of “the boy who harnessed the wind”. The interpreter interpreted and discussed the video with them, in Hausa, as they watched attentively. They were then formed into groups and allowed to make their own wind mills. Their eyes shone with excitement as they used the wooden sticks and cardboard papers, some of which WAAW facilitators encouraged them to source for, from the junk in their surrounding.  This did not just demystify the technology, it was a big encouragement to the girls! They even powered a bulb with it! What excitement technology can bring, and the spark of hope on the faces of the girls could have only been imagined.

Now they can be part of technology with simple things they see around them, it was no longer what they looked from afar, now they are seeing this and can handle it by themselves. This indeed was great for some of those girls who were already out of school. WAAW foundation encouraged the best participant by giving her STEM materials to practice with over time. Lunch was of course the icing on the cake.

What will be the fun in not taking pictures after such a beautiful and inspiring time with the girls? Aside the excitement of the usual exercise, the mentoring and tech testimony sessions are worth looking forward to. When asked about the sessions, everybody had great and exciting comment but most touching of them all are from Mariam Usman and Fatima Ali and I quote: Mariam Usman “Now I know, I can do great things that great people do”, Fatima Ali “That every success is in stages and everyone should be willing to patiently go through that process to be great in life”

It didn’t end there! Day 2 involved the women and adolescent girls of the camp. Speeches on this day featured life related talks that cut across crisis management, planning, hygiene and career as oppose the exclusive academic session that took the younger girls through hands-on practical on the first day. 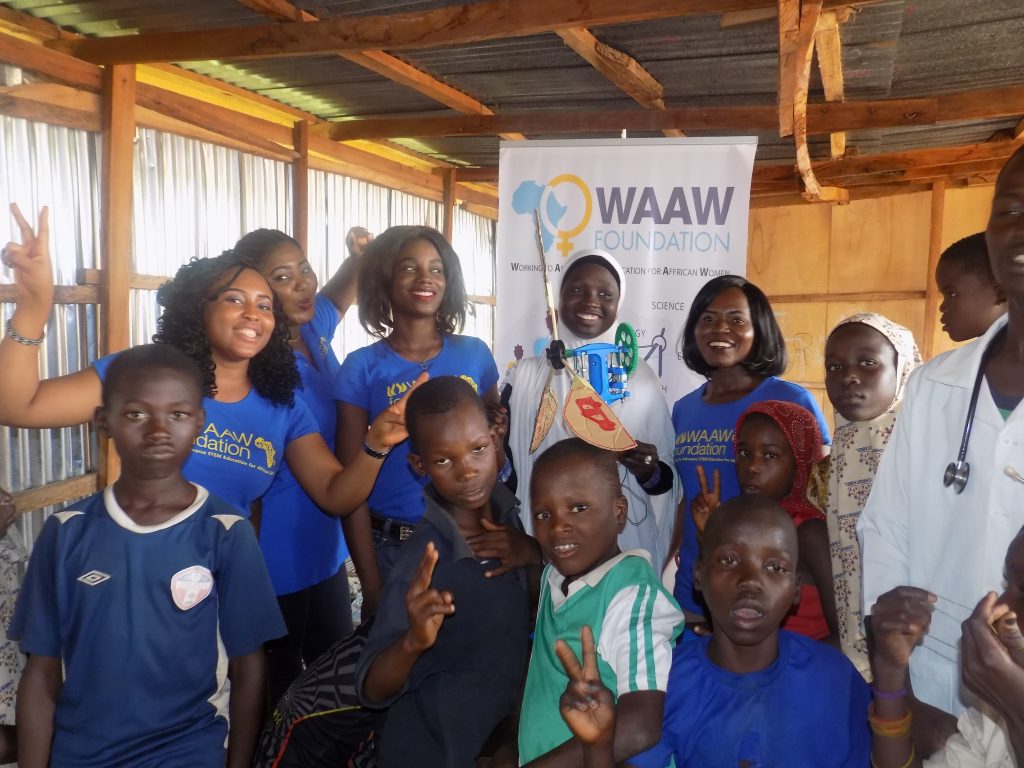 In partnership with Strong Enough Girls’ Empowerment Initiative, sanitary pads were donated to the women to encourage proper menstrual hygiene. In the same vein, John Bosco, Business Manager for Abuja Technology Village (ATV) Foundation, Oluwatoyin Oluwaniyi of EduTeens Science Development Foundation, and Barrister Aisha Ngada engaged them in career talk. Thanks to the friends and partners of WAAW Foundation who made the second day of the program a remarkable one. There may still be much to do, but this is moving forward!