WAAW Foundation, in partnership with ENSPIRE, successfully participated in the 2016 Hour of Code by training scores of secondary school students in Lagos and Abuja, Nigeria’s capital in December.

The #HourofCode is a global movement reaching tens of millions of students in over 180 countries. It started as a one-hour introduction to computer science, designed to demystify “code”, to show that anybody can learn the basics, and to broaden participation in the field of computer science. It has since become a worldwide effort to celebrate computer science, starting with 1-hour coding activities but expanding to all sorts of community efforts. 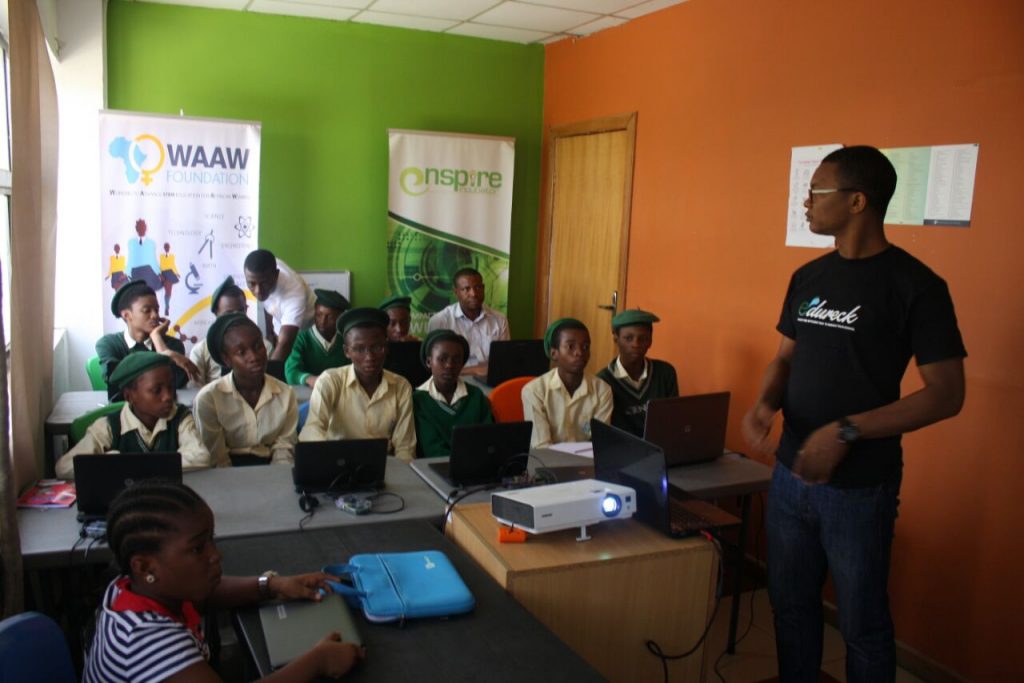 WAAW Foundation has been on the forefront of empowering young women and men on technology. The foundation activities include the Girls’ summer camp program, Secondary education teacher training program, scholarship awards for college girls and college-to-secondary school outreach and mentoring program.

In Abuja, the training held at the NEPZA Building in Maitama, and had in attendance a score of students from Government Science Secondary School, Pyakassa, Maitama Abuja.

Students were trained on Logic and Critical Thinking, and were exposed to “Introduction to Coding Using  Scratch.

Mr. Tejumola Pelumi, a Software Developer and trainer at the event stated that the training availed the students opportunity to know more about order modafinil europe coding and full stack web development. “For the very first time, the students were being introduced to practical programming and were amazed at how programs and coding works. Some of the students have expressed their desire to teach their colleagues what they have learnt and they also hope to learn more from WAAW Foundation,” Pelumi said.

In Lagos, Nigeria, students of Federal Government College, Ijanikin, were beneficiaries of the #HourofCode training. A total of 30 students participated in the event and were amazed at what they could do with Scratch.

During our two hours of training, students comprising mostly girls were able to code the first letter of their names and some did a presentation on creating different shape objects. Speaking at the end of the training, Miss Loveth Ubi, Business Development Manager for WAAW Foundation charged the students to spread the knowledge to other students who were not opportuned to participate in the training.

“I could see the students were excited learning something new most especially coding. The success of the training will not end here until they impact what they have learnt on other. And in WAAW Foundation, there are many more opportunities for young people to learn about technology and entrepreneurship,” Loveth said.